Posted by David Winter in Models on 15 February 2010

Is coaching/guidance always such a positive experience?

In an early post I suggested that the popularity of coaching might be attributable to the fact that coaching models all seem to have positive, sexy-sounding acronyms.

I have just come across another model with a cringingly appropriate name. Based on the popular GROW model, Saul Brown and Anthony Grant from Australia have come up with a coaching model for working with teams called…GROUP.

Brown, S. W.  & Grant, A.M. (2010) From GROW to GROUP: theoretical issues and a practical model for group coaching in organisations. Coaching: An International Journal of Theory, Research and Practice, 3(1), 30-45.

I can’t really tell you much more about it because my Athens account doesn’t give me access to Coaching: An International Journal of Theory, Research and Practice, so I can’t read the whole paper. Although, I did notice in the abstract they refer to ‘Scharma’s U process’, by which I assume they mean Theory U developed by Otto Scharmer. I mentioned this in my article on levels of listening. They also allude to ‘double-loop learning’. This is one aspect of transformational learning which was an inspiration for the Zones model.

I think Seasonal Affective Disorder has set in because I had a bit of a grumpy week last week. As a result, I’ve decided that I’ve had enough of positive, chirpy model acronyms and want to invent a few that reflect the sometimes disappointing reality of coaching and guidance.

END_OF_DOCUMENT_TOKEN_TO_BE_REPLACED

The benefits of pessimism

Last week I learnt a new piece of jargon. A ‘fat-tail event’ is something that you thought was virtually impossible, but it happened anyway. In theory, it could be very good or very bad, but it usually refers to something extremely unpleasant, such as a financial crisis.

The phrase comes from statistics. Many randomly occurring events (such as the height of the person you sit next to on the bus) are assumed to follow what is called a Normal Distribution (the classic ‘bell-shaped curve’). So you are more likely to sit next to someone around average height and less likely to sit next to someone really short or really tall. With the Normal Distribution the probability of something really unusual happening tails off really rapidly the further away you get from the average — it has a thin tail.

However, some things in the real world don’t follow the Normal Distribution curve. Instead of a thin tail, they have a fat tail. This means that certain extreme possibilities are more likely than you might think.

I was quite pleased to be able to use my newly discovered jargon in a session on negotiation skills I was running last week. I was talking about the usefulness of assessing any negotiated deal by imagining how it would look if subsequent events turned out a lot better or a lot worse than you were expecting (e.g. your fixed-rate mortgage doesn’t look so good if the Bank of England cuts rates to zero).

Does this black swan have a fat tail?

A related term for unexpected events is a Black Swan, coined by author Nassim Nicholas Taleb. This is the unexpected event which you could not have predicted based on your previous experience and derives from the fact that, until they were discovered in the 17th century, most Europeans thought that black swans could not exist.

END_OF_DOCUMENT_TOKEN_TO_BE_REPLACED

It's nothing to do with a nuclear deterrent!

I was really pleased by the response to an earlier post in which I described my own Zones model. People seem to have found it helpful in framing what is going on with a client during a discussion. Buoyed by this success, I thought I would present another model that I tend to use in my practice. Because of the shape of the diagram, I call it the Trident model. As usual, it has been inspired by a number of different sources (see the Further Reading list at the end), but it was mainly triggered by the debate over the differences between the Counselling and Coaching approaches to guidance and the relative merits of action and reflection.

Personally, I find it useful to keep track of the balance and focus of a discussion with a client.

END_OF_DOCUMENT_TOKEN_TO_BE_REPLACED

In the right zone

Posted by David Winter in Models, Skills and methods, Understanding clients on 26 November 2009 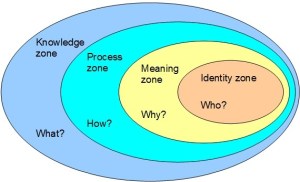 What zone are you in?

A model that I use quite frequently in one-to-one guidance and group sessions is one that I cobbled together myself. I call it the Zones model (or Zones of Impact model).

The original spark for the idea came from the Cognitive Information Processing model. I was scared off by words such as ‘metacognitions’, but the idea of different domains of thinking appealed to me, as did the notion of using these domains to identify the type of help that would be most appropriate for particular clients. Further inspiration came from the knowing-why, knowing-how and knowing-whom of the Intelligent Career model and Blooms Taxonomy of Learning. I later came across the Transformational Learning model (sometimes called triple loop learning) which again looks at different levels of change that might take place with a client.

Out of these various sources of inspiration, I wanted to make a model that I would find easy to remember which would help me to locate and assess the type of help I was giving to clients. Thus was born the Zones of Impact model. The model attempts to classify different areas of client needs in four primary zones.

END_OF_DOCUMENT_TOKEN_TO_BE_REPLACED

Ok, ok, this isn’t a trawl through the back issues of Hello Magazine to identify the ‘first’ ever model, instead a look at the FIRST Framework. I came across this model a few weeks ago and initially really connected with its simplicity. FIRST stands for: Focus, Information, Realism, Scope and Tactics. The dimensions of the FIRST framework can be used as a diagnostic tool to ascertain the stage the client is at in their career thinking.

END_OF_DOCUMENT_TOKEN_TO_BE_REPLACED

Is helping too fluffy?

Posted by Katie Dallison in Models, Skills and methods, Understanding clients on 1 October 2009

As a newly qualified adviser, I was really interested to look into the differences between the types of training I received on my New Zealand course and what the majority of my colleagues go through on UK courses.  There were many!  Apart from never hearing mention of DOTS (sacrilege I know!) a major part of our course was spent exploring guidance models and what actually takes place within a guidance discussion.

Much was based on Robert R Carkhuff‘s work regarding helping models.  The basis of his developmental model for helping is based around a 4 stage process explained below.  I’ve used examples from a careers discussion to help put it in perspective.
END_OF_DOCUMENT_TOKEN_TO_BE_REPLACED

The three levels of listening

Posted by Saiyada Smith in Models, Skills and methods on 8 September 2009

I am preparing to deliver The Careers Group’s two day Basic Guidance Interview Skills training course. In preparation and in search of new ways of bringing to life the training, I have been reading a book by Laura Whitworth called Co-Active Coaching.