I would like to thank Vinny Potter from Queen Mary, University of London for contributing this post — David

What could be simpler?

This is a response to Katie Dallison’s post about metatheories. As has been said before in this blog, Metatheories can be very useful in careers advice, but generally only after the session. For me, that is all very well and good, but sometimes it’s nice to have a theory to hold onto during the session.

Unfortunately for me, a lot of theories are quite cerebral. They encompass a lot of abstract ideas and they can therefore be more difficult for me to remember.

Most people can only hold a few things in their head at any time. During Guidance you already have a lot to do. You need to listen intently to the client, analyse what they are saying, what they are not saying and their body language etc, then conjure up a response based on your interpretations of all of this, whilst sometimes reaching into your brain for other nuggets of pertinent information which could help the client.

So I have come up with a new and simpler career theory. 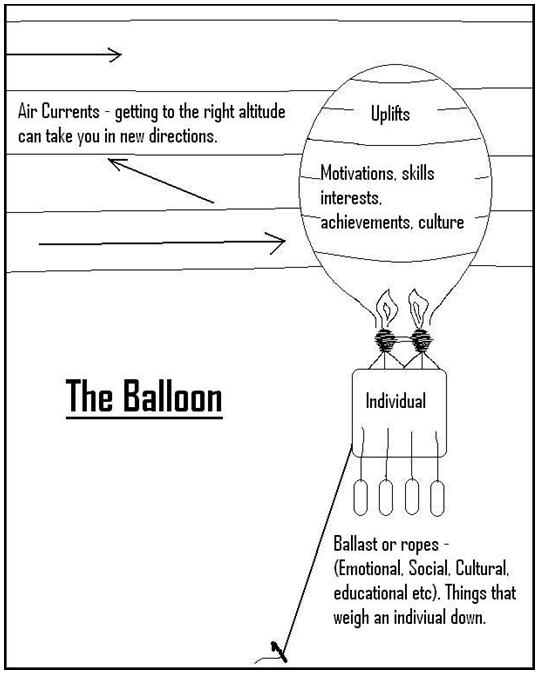 I call it “the balloon”. Instead of having things as quite abstract, I have used a simple visual metaphor of a hot air balloon. I have decided that I will not explain “the balloon” to you, as the basic concept should be fairly obvious (If it is too complicated I will have failed) and also it should be flexible enough that you can change the meanings of each bit of the metaphor depending on the client.

There are three reasons I think this theory is useful.

What do you think? Could it be useful to use simple visual metaphors like this or should we, as professionals stick to the more academic style theories and metatheories?

This entry was posted on 18 April 2011, 12:25 and is filed under Career choice, Metaphors, Understanding clients. You can follow any responses to this entry through RSS 2.0. You can skip to the end and leave a response. Pinging is currently not allowed.