One theory to rule them all?

It is generally accepted that there is no ‘one’ right theory that suits every client, so how can a practitioner make some sort of sense out of the multitude of approaches that exist within the modern academic careers world (apart from following our blog of course)?  Enter Patton and McMahon (1999) Systems Theory Framework of Career Development (STF).

The theory is based around the biologist von Bertalanffy’s (1940) work on general systems theory which explained how all living organisms basically work like machines, all parts of the machine working together and affecting the final product in a linear and direct way.  Applying this to career work, each person (or individual system) has their own set of characteristics (i.e. gender, race, age, beliefs, values etc.) some of which are set, and others are influenced by the context the individual finds themselves in. 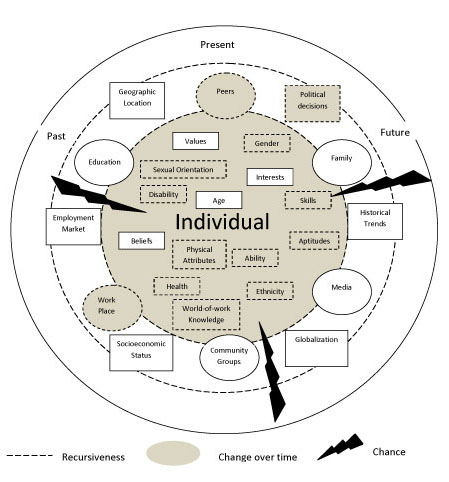 Each of these three systems has elements that affect the individual at different stages of their life.  When elements are active with STF they are said to be exerting recursiveness on the system.  STF also allows for chance events to occur, shown pictorially by a lightning bolt slicing through the system.

So how does STF combine many careers theories?  And how does a practitioner apply it?  This is where I struggle with this theory.  Patton and McMahon talk about how it places equal emphasis on both the process of careers decision making, which theories like Super’s Life Span, Life Space approach have covered in the past, and the content of that career discussion, as explored by theorists like Holland and Parson (trait factor).  It also encompasses the postmodern theories like Social Cognitive careers theory and is adaptable enough to consider aspects like sexual orientation, race and sex.  However in practice, STF is a massive beast to try and remember and implement.  I have used it as a reflection tool after seeing clients which worked well.  I also think the pictorial element of the theory, representing historically what career pathways look like could be interesting to use to certain clients, although I haven’t had a chance to try this yet.

This entry was posted on 21 March 2011, 11:10 and is filed under Career choice, Decision making. You can follow any responses to this entry through RSS 2.0. You can skip to the end and leave a response. Pinging is currently not allowed.